My feedback over DATA PORTAL INDIA

September 8, 2013 Aniket Maithani
Well few months ago I was introduced to a new concept called OPEN DATA, which is nothing but refers to the data which is available to the public without any hassle. We all know that DATA in general has no particular significance unless and until it is processed and something meaningful  is conveyed out of it.
I was surprised to know that NIC (National Informatics Center) is already, working on DATA PORTAL OF INDIA,  and numerous amount of data is already there. Since I was the part of their collaboration (IN PURSUIT OF AN IDEA), so I thoroughly peeped into some of the data sets that were there on DATA PORTAL. I believe that it is a very remarkable  step to allow people access to certain kind of data. Some of the applications we made using the data from DATA PORTAL are displayed here. But to my surprise there are still some gaping loopholes in the DATA PORTAL. This post is not an attempt to discourage Government to not to publish data, but in fact it is my way of saying that you can always improve such things.

First of all the website design is good, and graphics and other things are quite well embedded, but the only thing which troubles me as a DATA PORTAL user is search query. Sometimes, search query takes longer than the usual to produce output. I think this is one of the aspect which can be improved. Also the quality and the indexing is pretty basic in nature, I may be wrong here because I am still not fully aware of the backend part but still it appears that some of the searches show results which are totally not required, for example I want a dataset related to crops grown in Himachal Pradesh, so my general search term would be Crops + Himachal Pradesh or the whole query, Crops grown in Himachal Pradesh, these are the search result I generally get, which is quite absurd because as per my query the result should be pin point and upto the mark. Searching should be made more user friendly! 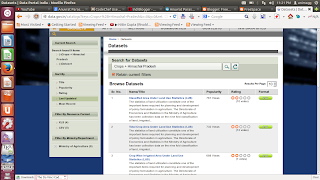 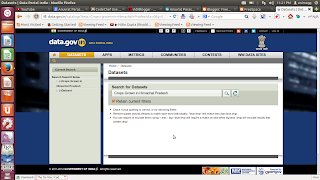 Secondly, data.gov.in often face downtime of total of 10+ minutes per week, especially at night( I may be wrong here but happens with me most of the time). Though, I understand that server maintenance etc are some of the issues for it, but if that is the case why don’t GOOGLE or FACEBOOK or any other TECH giants faces the similar issue, I bet that they are also handling a large amount of data, and also the number of user of GOOGLE and FACEBOOK are much more than that of DATA PORTAL itself. Yes, these TECH GIANTS do close up for their maintenance but only once in a while.

On one front I want to congratulate the dev team of DATA PORTAL INDIA, that they have solved the login and session expiry issues,  so KUDOS!

Now coming on to another major part, in some of the datasets I find that there are many discrepancy or the their is no valid information given about such discrepancy. For example few days back I was searching for a dataset and I came across a dataset, which was about the elected members, during the first LOK SABHA, and it says 543. I initially didn’t thought about it but then after referring to Wikipedia, I came to know that during the first GENERAL ELECTION, only 489 MP’s were elected to the Lok Sabha, so why the official data here is saying 543!! Even the data with same discrepancy is there on the official LOK SABHA’s website. Since the Wikipedia is also managed by users I thought ECI that is Election Commission of India must be having some information about it. So as per ECI official data, it was 489 only, so on seeing this discrepancy, I went on to report this problem to the DATA CONTROLLER, Mrs. Sushma Rungta (as per data.gov.in) but till now I haven’t got a reply! I mean it’s good that you want to engage people in your open data concept, but unless and until a swift and apt reply won’t come up, this will end up being just another project. And ultimately it will damage the whole idea of data sharing on a community based scale.

Finally, I feel DATA PORTAL and Data Sharing Policy is an excellent venture that Government of India has launched. It’s just that some of these issues need to be resolved and gaping holes must be filled as soon as possible. Furthermore, I am looking forward to contributing more to it.

Till the next time ADIOS!